This afternoons session began with a guest speaker Danielle Tiplady a student nurse, who informed of how she and her colleagues were fighting to save bursuries for student nurses within the NHS, she also told how she saw junior doctors in tears yesterday after Jeremy Hunts announcement to impose the new terms and conditions !!!

Dave Prentis,UNISON General Secretary despite having ‘man flu’, addressed conference and began by offering both his and Unisons support to Danielle and the fight she was about to embark upon! He informed that this conference of 800 members was one of the largest ones in the last few years confirming that union membership is not dying, and it is a most important time to become involved in the union, so to take on the government in the forthcoming coming year!! He continued to talk about the Trade Union Bill and its attacks on the union of which women are largely affected.

Motion 15 ‘Maternity Discrimination’ an issue for the whole union and the statutory rights women are entitled to !! Several speakers contributed to this motion informing of statistics and real stories of discrimination – vote carried 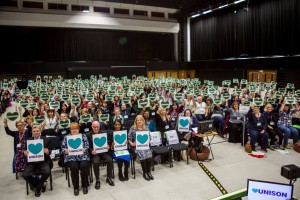 Nearing the end of our main day but we’re still busy! #unwc16 A few more important motions being debated, hustings, the…

Motion 19 ‘online safety for women’ calling for national womens committee to publish guidelines to make women aware of potential dangers. One delegate shared how she lost 9 months of her life through being harassed through social media  by a manager ☹️as she had to go off sick. Another delegate recommended that if a policy is present in the workplace to ensure that the employer is accountable. National women’s committee to support – carried.

Motion 20 amended by 20.1 ‘Save our Newborns’ information given around babies being born with strep B when a simple test can prevent it – clearly carried

Motion 21 ‘Women and Workplace Dress Code’ call to remove dress codes and eliminating gender specific dress codes. This was a popular motion with lots of speakers. This motion was carried.

Motion 22 ‘Women’s rights are human rights’ This motion was the only motion over the past 2 days that had speakers for and against and was very emotive. This motion talked about prostitution and the sex trade. It talked about the Nordic style law that decriminalises the sale of sex and criminalises the buyers and pimps. There was much debate, which was passionate at times. There were 5 speakers against this motion and 5 for. The debate was cut short and it was a very close call when it came to the vote. The vote was carried by a small margin.

This is a photo of the motion, but if anyone wants to read any of the motions, we have a copy in the branch office.

A further four motions were all carried.

End of conference for day two 😀 Off back to hotel to pack and a rest before out to Harry Ramsdens for fish Friday 🐟🍽🍷.

Back in the morning for final session.