The following press Release has been issued by UNISON East Midlands

UNISON BALLOTS SCHOOLS MEMBERS IN DERBY CITY
UNISON has formally started the ballot process following a clear mandate from members working in Schools across Derby City. Following months of discussions and collectively we have exhausted all avenues to try and have School Support Staff views heard and responded to we have taken the ultimate decision to ballot up to and including Industrial Action.
UNISON locally have lodged a formal dispute with the employer. This has been acknowledged but no effort made by the employer to hear the complaint nor respond. 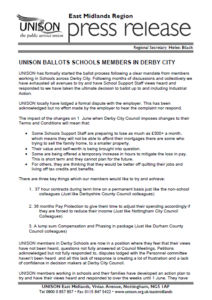