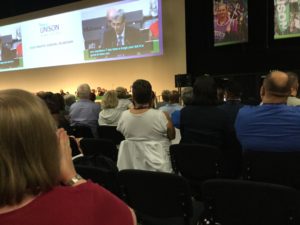 The conference started continuing discussions about the debate on poverty. And then moved onto a debate on the motion surrounding attacks on democracy. Then a speech from Dave Prentis, General Secretary of UNISON. Dave made a tribute to Jo Cox and the mass murder in Orlando, he also made a special mention to the School Support Staff on strike in Derby and Durham. Then debates took place on the motions for Living Standards, pay justice and the living wage, and Funding for National Minimum Wage.