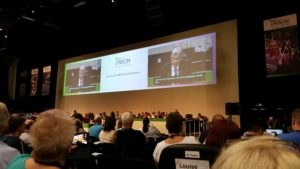 Prentis General Secretary for UNISON gave an opening address following the announcement that the result of European Union referendum was for the UK to Leave the EU.  You can read his statement here

This mornings motions covered Strengthening our union: supporting and developing our stewards, supporting our activists who have to deal with stressful situations, European Union trade agreements.

Now onto this afternoons session discussions around Women and the State Pension, Immigration, Detention and Deportation, and Public Service Workers under Pressure.

Wendy Nichols President of UNISON gave the closing speech to officially close the and announced that Eric Roberts will take over as President for 2016/17. Eric passed on a vote of thanks to Wendy and votes of thanks are being given by other members of the Union.