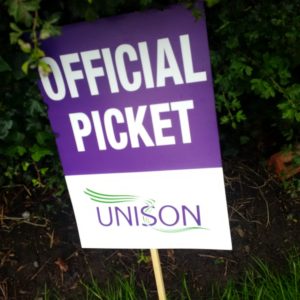 Your Pay – Your Campaign – Strike latest.

You’ve been brilliant.
It has been sad to see that Derby’s Councillors have been willing to cut the pay of school staff. Schools staff pay was hardly high before but councillors willingness to reduce it further still, leaving people who educate our children earning little more than a councillors basic allowance. The response from UNISON members in schools though has been brilliant. We have seen successful strike action across the city which has had a significant impact on school services. Support from parents and indeed from many heads remains high.

We are having an effect. We need to keep going.

Talks
So far UNISON has met with the Chief Executive and other senior officers on 4 occasions to talk about the dispute. We’ve been talking constructively about various options for resolving the dispute but we don’t yet have any breakthrough and there is nothing on the negotiating table that would enable us to call of the industrial action

What next?
UNISON members have said that there may be an opportunity to end the dispute if people are offered 37 hours on a permanent basis and an amount equivalent to Special Classroom Allowance is reinstated. This means that there is the opportunity to suspend strike action in schools where this happens. UNISON are considering the implications of the options which would be available to us, to resolve this, if this becomes something which Derby City are willing to talk about. We will update you once we have fully considered all the options and the implications shortly.

Next week we are striking 12-2pm. Formal notice has been received by the employer in sufficient time to allow for this.

· Tuesday, activity will be to support members of the NUT taking action on the same day
· Wednesday, we will be holding a DEMO outside the Council House, assemble at Royal Oak House. Bring your own banners and placards
· Friday will be at the Rivergardens initially for cake & chip cobs, followed by a further demo outside the council house. Think creatively about what you would like to do on this day.

Any questions?
Please ring the branch office on 01332 643216 or email unison@derby.gov.uk We are committed to responding to all queries as speedily as we can.