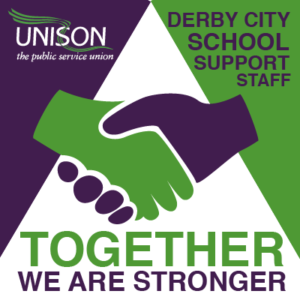 Dear Members
Following the imposition of the Pay and Reward exercise on the 1st June 2016 school support staff have been in dispute with the employer over the impact the changes to their terms and conditions has had upon their pay.

School support staff are not highly paid employees they are low paid ,predominantly part time female employees of which the equal pay legislation should protect. The imposition of changes to their working hours and weeks has resulted in over 2000 school support staff loosing 30% of their pay without any protection. This equates to a loss of over £5000 reducing pay to less than £15,000 per annum , this is penalising low paid workers and negatively impacting upon their families forcing in work poverty and a potential reliance on benefits and debt…..this is unacceptable, this is not a race to the bottom.
UNISON members in schools overwhelmingly said yes to industrial action in an attempt to bring the employer back to the table.Your employer has made false claims about this group of workers for exercising their legal right to withdraw their labour, your employer has sought to demonise them and alienate them from the rest of the council workforce.
Your employer has claimed that your colleagues in schools are causing disruption to the on going education of derby,s children however UNISON members did not make the decision to change their terms and conditions. Your employer has claimed that school support staff withdrawing their labour has caused an inconvenience to parents and carers yet these very parents and carers fully support the action taken by school support staff and have themselves lobbied the council to resolve the dispute. This group of parents and carers do not put the blame on UNISON members in schools but upon Derby City Council for not willing to engage with UNISON to come up with a meaningful resolution and prolonging the disruption to their children’s education.
Parents, carers and teaching staff know only too well the value of the role that support staff in schools play in supporting and developing children’s education.

Derby City Council have been reluctant to meet with UNISON and only agreed to meet with us when our members took direct action. UNISON made numerous requests to elected members before, during and after the ballot for industrial action ,including making a request to ACAS to facilitate a mediated response. Derby City Council refused to meet with us.
Derby City Council agreed to finally meet with UNISON and ACAS after the impact of the industrial action was felt. These meetings were not negotiations and only after the third meeting did the employer put an offer on the table. This offer only benefited 300 UNISON members whilst the other 900 were offered nothing.
We balloted our members on this offer and it was overwhelmingly rejected as being insulting,derisory and divisive.
UNISON requested to meet the employer when it was clear at the onset that the offer would be rejected, the employer refused. The employer only agreed to meet after the ballot closed and in an attempt to stop UNISON members lobbying parliament.
The employer put a second offer on the table however this improved offer only benefited the same 300. We agreed to ask our members however we would not be suspending action, the employer withdrew the offer. We have asked our members and they have overwhelmingly rejected it as being insulting,derisory and divisive.
UNISON members will now lobby parliament on Wednesday 14th September and they will be joined by Dave Prentis General Secretary, Jon Richards National Officer for Education and Angela Raynor MP Shadow Education Secretary.
The dispute by school support staff has gained support from Jeremy Corbyn, Chris Williamson, Amanda Soloway MP ,kevin Courtney General Secretary NUT, FBU, TUC Congress, UNISON nationally and has raised funds in excess of £100,000. This dispute is not going to go away our members will not be blamed for the employers ineptitude to manage a JE exercise nor will they be starved back to work,Margaret Thatcher is dead and this is not the 1980’s.

UNISON is continuing to collate the information we need to progress equal pay claims.
The branch has employed a officer to visit members and teams who we believe may have an equal pay claim, she will be in touch soon.
In addition we are aware that a significant number of our members are unhappy about the appeal outcomes and we urge you to contact the branch.