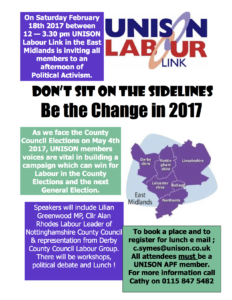 All Labour Link UNISON members are invited to an afternoon of Political Activism on Saturday 18 February at the UNISON Regional Centre in Nottingham between 12 – 3.30pm.

All Labour Link members from across the across the East Midlands are invited to join local politicians for an informal lunch followed by an afternoon of political debate and decision making. This event is focused on building a campaign across UNISON which can win for Labour in the County Elections and the next General Election.

Speakers will include Lilian Greenwood MP, Cllr Alan Rhodes Labour Leader of Nottinghamshire County Council and representation from Derbyshire County Council Labour Group. Member participation will be at the heart of this event, it will be an opportunity to meet like minded UNISON members and the ideas and energy members bring will form the foundation of UNISONs Labour Link activities in the County Elections. All attendees must be a UNISON APF member and have confirmed that they will be attending with c.symes@unison.co.uk