Our School Support Staff today took their campaign to London, delivering hundreds of letters to the Labour leader Jeremy Corbyn, asking him to step in to resolve their long running dispute with the Labour led council in the city. Dianne Abbot Labour Shadow Home Secretary also showed her support for their campaign.

‘We went to London today to ask Jeremy Corbyn and the leadership of the Labour Party to help us. Ranjit Banwait and the Labour Council in Derby need to listen to Jeremy when he says Labour will support working people. We’ve lost 25% of our pay, we’re all struggling and we need Ranjit to reverse the Council’s decision to cut our pay. We thought that if he wouldn’t listen to us, maybe he’d listen to the Leader of the Labour Party. Jeremy has already said he’s on our side, so hopefully he can step in.’

Seven school support staff from across Derby travelled to London to deliver letters to Jeremy Corbyn, John McDonnell, Angela Rayner, Grahame Morris and Iain McNicol. Those letters called on the leadership of the Labour Party to step in to resolve the ongoing school support staff dispute in Derby. The dispute, which has been going on since June last year, began when Derby Council took the decision to cut change the terms and condition of school support staff in the City, with the effect of cutting their pay by around 25%.

The letters to the Labour Party leadership said:

“We are writing to urge you to intervene with your Labour colleagues in Derby, to live up to the real values of the Party, and to ask them to urgently resolve this dispute.

The Labour led Council in Derby are the only local authority to have cut the pay of school support staff in the way that they have. Please help us to resolve this dispute so we can go back to work, keep our dignity, and serve our community.” 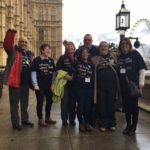 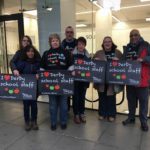 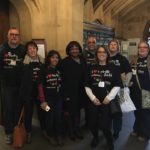