“I’m really sorry to hear the Council intentionally misleading people about the negotiations. At the very least, our community deserve to know what the Council are doing. On 6 separate occasions last night, the Council said they wanted to ‘sit down and talk’ despite having cancelled two meetings in two weeks with UNISON, after previously walking away from the ACAS negotiations. If finding a solution really was the ‘priority’ that Cllr Eldret says it is, they wouldn’t have done that, would they? Even if Lisa Eldret isn’t available why can’t the leader of the Council, Ranjit, meet with us?  We have always been ready to talk, but we need a willing partner if we’re going to find a solution that puts an end to this dispute.”

In an interview with the BBC Radio Derby drive time show last night, Cllr Eldret was asked to respond to the news that 7 school support staff had visited London to push Jeremy Corbyn to intervene in the dispute. She said:

Those statements follow the Council’s decision to cancel two meetings over the last two weeks and their continued reluctance to enter meaningful negotiations over the course of the last 9 months, including those mediated by the dispute resolution service ACAS. Despite criticising school support staff for lobbying MPs in London, the Council have finally agreed to meet UNISON today.

The school support staff dispute is now entering its 9th month, following the decision of Derby Council to impose new terms and conditions on school support staff across the City. As a result staff are losing around 25% of their pay, on average around £94 per week. Derby City UNISON have remained ready to talk throughout the dispute with a view to finding a solution so that staff can go back to work, protect the education system in Derby and end the disruption to the community. 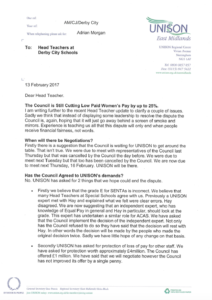 Here is the Head Teacher’s briefing sent out to all Head Teachers across Derby, outlining UNISON’s current position.

It is absolutely disgusting how our valuable, highly trained and experienced colleagues are being treated. Enough now derby city councillors you would not work for what you are offering them!!!!!