Day 2 begins with a report from the Standing Orders Committee and an introduction by Heather Wakefield on Section 5 of the Annual Report. 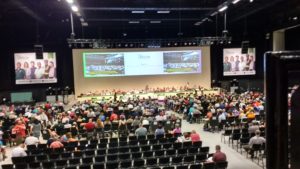 Now discussions are being held on the motion “Closing the gender pay gap in the local government” this motion was passed. This motion asks the Service Group Committee a number of actions. It asks the committee to put pressure on employers to take positive action to close the gap, issue guidelines to branches on how this information gathered in recent activities to make progress on closing the gender pay gap within their local authority, and to continue their work  with the wider union to take more effective measures to close the gap.

A motion covering “Youth Work” and the work that they do has now been discussed and agreed, this motion seeks to ensure that the a service group executive to use various social media channels to ensure retention of young members, campaign against threats to cuts and restructures to youth workers as part of the “Save Our Local Services” campaign. apply pressure to the employers, survey youth support workers, produce recruitment and organising materials focussing on youth work professional issues, and to ask Cymru/Wales region for a report on its initial experiences of registration for youth workers and youth support workers In Wales.

“National Joint Council (NJC) pay claim and campaign 2018 onwards” motion is now being discussed, this motion was passed and seeks to create a union-wide campaign calling for an end to public sector pay restraint, a campaign that demonstrates UNISONs determination to achieve, pay aspirations to the Local Government Association and highlights low pay in local government and schools to the public.

A minutes silence was be held at 11am in light of the Grenfell Tower tragedy and to remember the work of the residents and all this that have been involved in assisting them. 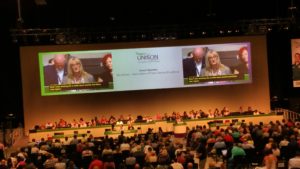 Now a guest speaker from Mo Baines from the Association of Public Service Excellence delivers a speech covering Austerity, the Social Housing Crisis and the experiences she has seen and also where she sees public sector work and funding in the future. 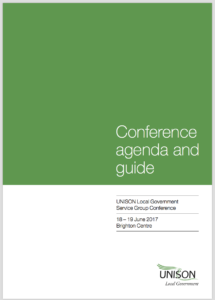 Now for discussions on Composite A (Below) – Workplace mental health in local government, includes motions 14 and 19 and can be read in the document by clicking it here.

this composite seeks to campaign for improved support for workers experiencing mental health issues, review current UNISON guidance on mental health, encourage branches to raise with their employers the need for occupational health services that deal appropriately with mental health issues, promoting UNISONs guidance across the union, and other measure to ensure that workplace Mental Health is at the top of the agenda across all areas of Local Government. 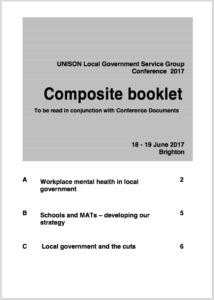 Emotional accounts of support for this composite was given by many members which highlighted how important Mental Health is for our members and aware of the pressures that the cuts to funding for services has and can increase issues surrounding Mental Health for the individuals affected by the cuts.

This Composite has been agreed.

We now move to the the next motion covering “Food Standards Agency – pay, terms, and conditions” this motion has been passed and it seeks to oppose privatisation and deregulation of the FSA, increase campaigning presence in all parts of the UK oppose animal welfare abuses and working with animal welfare groups, making UNISON national media and communication resources avaliable to highlight their campaign, oppose performance related pay reductions, educate the public, and work to highlight the importance of state employed, independent meat inspectors and official vegetarians.

Other motions that were discussed include..

Bullying of Black Workers in the Workplace – with the motion will continue to be discussed at the afternoon session.

This concludes this morning session and check back later for the afternoons coverage.