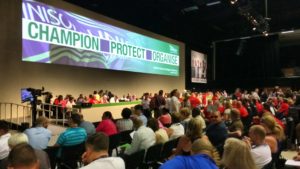 Welcome to the opening of the UNISON National Delegate Conference 2017

Carol Sewell welcomed everyone to the conference and covered housekeeping, safety arrangements and paid tribute to Eric Roberts President of UNISON who sadly passed away last year.

Carol went on to introduce International Speakers that will be delivering speeches later on in the week. Following this she talked about those who have passed away over the past year and paid tribute to all of these activists a short film was shown with names of all those that have passed away, and also paid tribute to the tragedies in Manchester, London Bridge, Grenfell Tower and Finsbury Park. 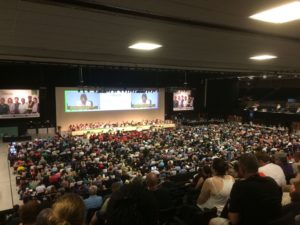 Now conference is under way and there is a report being delivered for the Standing Orders Committee reports. the First SOC report was accepted and discussions are now being held around SOC report two this report highlighted the important areas for debate this conference, this covers Social Care, budgeting, public service campaigning, LGBT Rights, the UKs exit from the European Union, Mental Health issues. Questions were put against some legalities for the second SOC report and responses were given by the Standing Orders Committee for referencing back to conference. 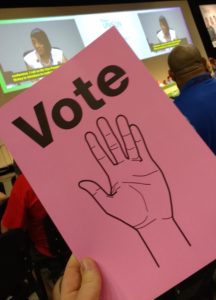 Corbyn will be addressing the conference on Friday, Stephen Lewis form AIDS Free World., video presentation featuring Huber Ballesteros from Columbia, there will also be other Guest Speakers that will be revealed later in the week.

There will be an official collection at conference for the Red Cross to assist victims of the terrorist attacks in Manchester, London Bridge and Finsbury Park and victims of the Grenfell Tower fire. However the SOC have received a question that will be referenced back to conference on the working conditions of the Red Cross following a recent report and will be reported back to conference. 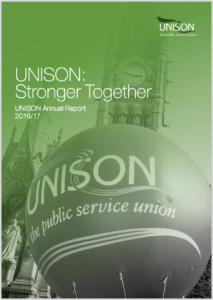 The Annual Report is now being introduced  by Margaret McKee, vice-president, junior and the motion to accept all parts of the report was carried by conference it can be read here… 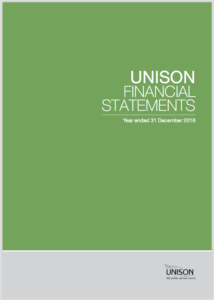 Josie Bird presents the Financial statement to conference and explains the differences between this
year and last year. Josie went on to cover significant areas of the report including pensions for staff, fraudulent activity, branch spending and the industrial action fund. and that Union is in good financial position but must be used effectively and efficiently to further strengthen the union.

The report was agreed

This can be read here.

Look out for the next blog post which will cover the motions and discussions that are to take place shortly.