Carol Sewell welcomed all back to the conference, now the standing orders committee

The Red Cross will be the nominated charity for the collection at the end of the conference.

Questions are currently being raised regarding todays Standing orders committee report No 4, updates and responses will be issued later in the day. 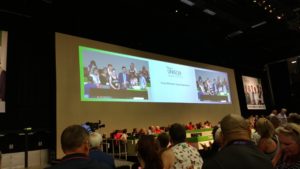 This was awarded for their anti-bullying campaign.

Now discussions move on to motions, the first one to be discussed for today is “Activity-Based Budgeting” this raised some passionate accounts and support for this motion to be carried, this motion was passed but there was some confusion as to what was being voted on. 0finally the motion was carried.

“Developing an Organising Branch” was the next motion to be discussed and was carried.

Now “Organising and growing our membership in private contractors”  Is being discussed  and has been carried, more information on these mortions can be found in the conference document above.

before the next motion, conference was shown the following Social Care video highlighting the struggles of care workers.

The next motion to be discussed is “An Organising Strategy for the Social Care Workforce” this motion was passed and the conference will now reconvene this afternoon.