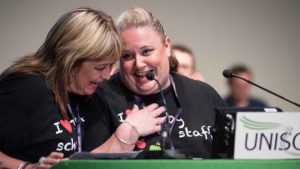 My name is Becky Everett, First time delegate and first time speaker.  I’m a 42 year old single mum to 2 amazing teenage boys. I’ve been a teaching assistant for over 12 years. Until the 1st of June 2016 I was considered to be a full time employee of Derby city council. I’m now classed as a part time employee doing the same hours for considerable less pay.

I’m not someone who has a busy social life however it is now non-existent. In September 2016 at work, staff were discussing the annual Christmas works do, I already knew I couldn’t afford to attend.

I couldn’t attend a close friends and work colleagues leaving do.

I have had to reduce my sky tv package to the minimum because I am in a contract I am unable to cancel it.

My mobile phone contract has also been greatly reduced again as I’m in a contract I am unable to cancel it.

I’ve cancelled insurances, subscriptions to various clubs and even my youngest son has had to cut his extra-curricular activities.

Why should my children even have to consider leaving their football clubs, rugby clubs and cadets?

All of these in my opinion are considered life skills and set children up for a successful future. I want the best for my children and I work very hard to provide it.

The public are quite right in saying the industrial action has disrupted education and was causing inconvenience to parents and carers. I too am a parent and I was fully aware of this.

I wonder if the people who made all these important decisions to cut our pay by 25% are able to sit back at their desk and carry on if the same was to happen to them. I think not…

At my appeal hearing against my dismissal and reengagement I proved I would be better off unemployed… That’s not right!!

I enjoy my job and I’m very good at it. This is the only reason I have not sought other full time employment.

Housing benefit is not a quick fix to help as it takes such a long time to process claims. Tax credits are based on the previous year’s income so not a lot of help to my family or many others. In all fairness there is not a lot we can do to ‘top up’ our income.

In October 2016 I had to get a 2nd job at Asda as a checkout operator so my children could have Christmas and I could continue to provide for my family. I now work 7 days a week.

I was lucky enough to secure a few extra hours per week at school; however these ended in March 2017. Living and working with the constant unknown takes its toll on your health.

I’m one of around 2700 school support staff who is fighting to retain the pay and work conditions I once had.

*I’m not asking for a pay raise.

*I’m not asking for anything more than I had before.

*I’m fighting for what is mine.

*I’m fighting to keep a roof above my children’s head.

*I’m fighting to keep my children involved in clubs so they have a sense of belonging and a reason to thrive into healthy well balanced young men.

I’m fighting to stop having to rob Peter to pay Paul.

I have little to no faith left in our Labour run Derby City Council. I believe DCC do not stand for true labour values.

For me the offer we fought for and won means I won’t have to work 7 days a week forever. It also means a return to family life and being able to support my youngest son through his exams without always being at work.

Being involved in this campaign has opened up doors for me I didn’t even realise were there waiting to be opened. I am now an active school steward and the opportunities this has given me are amazing. I’ve become Derby City Branch Equalities officer and I’m on dedicated time off each week as a branch officer. I’m starting to get involved in the day to day activity of the branch.  I’m learning so much and thoroughly enjoying the new challenges.

I have joined the Labour Party to help change Labour in Derby and have actively campaigned in the run up to the General Election, Proud to be part of the team winning back Labour in Derby North with Chris Williamson.

As 1 of 1000s of school support staff, I want to thank everyone in our Branch, as school support staff we have had some crazy ideas, and I mean crazy. Our campaign has been member led from the start but without the backing of our branch I doubt we would have been as successful. I believe I say this for every member of the school support staff team when I thank our amazing negotiating team. Adrian Morgan Regional Organiser, and Nicole Berrisford Branch secretary from Unison Derby City Branch.

Our motto throughout our campaign has been and will continue to be Together we are stronger. AND we have proved this to be the case.

Again HUGE thanks to all of Unison.  THANK YOU

I am here today to tell you about the action we took in Derby during our 73 days of strike action.

Taking action isn’t easy… we felt guilty leaving our classes and our teachers. But in all 73 days only ONE Labour Councillor has spoken to us.

They dodged us, they ran away from us, they have even cancelled surgeries and they swore at us.

For every day a Derby City Teaching assistant wasn’t in school – Children missed a vital part of their education and parents missed out on important respite.

From the beginning of the dispute it was member led with full support from the Unison.

A closed Facebook group was set up, which started on a Friday night with a couple of members by the Sunday we had over 600 members. Members made suggestions of what we should do in our campaign and unison facilitated these. One member suggested we went to Parliament, Unison said yes, so a few weeks later 5 coaches full of school support staff set off. We lobbied on the green outside. Dave Prentis met us, supported us alongside Members of Parliament. Some school support staff met with M.Ps inside Westminster.

Next, was Labour party conference in Liverpool, we handed out leaflets, and spoke to many Labour members though Derby Labour Councillors choose to avoid us.

Another member suggested a 24hr vigil, again Unison said yes. In February on a cold damp night we sat outside the council house for 24 hours. with so much support from the public.

On the evening of a full council meeting, we created a human ring round the council house. This was a silent protest. The same day we had an advan driving round Derby and supporting the silent protest in the evening. Dave Prentis joined us again to show his full support.

We canvassed the public around Derby city, in their homes, communities and all over the city.

The dispute saw us doing many different things including ongoing activist training and personal development training.

On March 17th 2017, after 10 long months of industrial action our employer Derby city council put an offer on the table that school stewards believed was worth offering to our members.

We returned to work after 3 weeks of all out strike action, while the offer was balloted. The offer was accepted by 91% of our members.

We are now in the process of working with the employer to iron out the details and make sure the NEW 52 week flexible contract is ready to implement for the new school year September 2017. And that the offer is the best fit for Unison members.

This really is a huge turnaround from our employer.

We, Derby City school support staff would like to thank ALL Unison branches and Head Office who have donated to our hardship fund. You have helped support over 400 families during our 73 days of industrial action.

We would also like to thank Dave Prentis for his continued support from the very start.