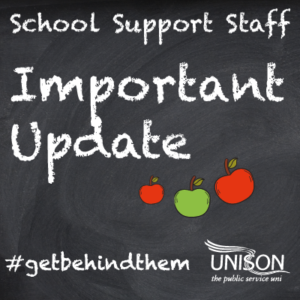 The People of Derby Deserve Better.

Negotiations between Derby City Council and UNISON to end the long running schools disputes have ended after the council refused to make any offer on any area of the dispute.

~A loss of 8 working weeks per year which cost staff 13% of their wages.

~A loss of £1200 per year special classroom allowance.

The council has not resolved any of these issues.

“This Councils leadership lurches from one crisis of its own making to the next.

You just have to ask if they are up to the job at all.

It is now clear that yet again the people of Derby face problems caused by the Councils leaders.

We will try to work directly with schools to avoid further strikes because the council is not willing or able to do so, But quite frankly the people of Derby, the Council workforce and UNISON members deserve far better than this Council.”