The awarding of a lucrative contract to a former senior executive, days after she was made redundant, shows the extent of financial mismanagement at Northamptonshire County Council, says UNISON today (Thursday).

Christine Reed, who was Director of People, Transformation and Transactions for Shared Services at the County Council, was made redundant in September 2016. She received a one-off redundancy payment of £50,000.

Shortly afterwards, the Council awarded a contract for IT services to Ms Reed’s company, Gradon Consulting.

Invoices obtained by the BBC show the company, of which Ms Reed is sole director and co- 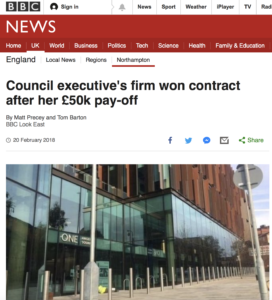 The contract was not advertised and an independent report by consultant Agilisys published a month after it ended described aspects of it as ¿wholly inadequate.¿ The contract was paid for with taxpayers’ money.

Local UNISON branch secretary, Penny Smith, said: I am utterly dismayed at the news that Christine Reed should profit from an organisation funded by public money.

Ms Reed’s pay off and re-engagement as a consultant, while staff are forced to take unpaid leave is morally reprehensible.

Our staff deserve better from their employer and we have let senior management know that this is unacceptable.¿