The first day of the UNISON LGBT+ Conference began with a welcome to all those who attended the conference, the standing orders committee reports 1 & 2 were brought to conference to start the business of the day. there was then a minutes silence to reflect on all those that we lost over the last year, and also to think forward to Transgender Day of Remembrance on 20 November  2019. Click on the image to learn more about this day.

Transgender Day of Remembrance (TDOR) is an annual observance on November 20 that honors the memory of the transgender people whose lives were lost in acts of anti-transgender violence. 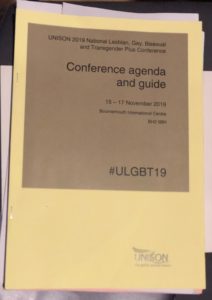 Following this the debate of motions began these motions were. (Click on the image on the right to read more about the motions) 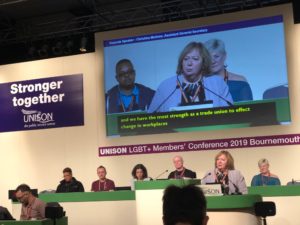 Following discussions of the above motions, we now hear a Keynote speech from Christina McAnea – Assistant General Secretary of UNISON. Christina talks about the change at National Delegate Conference from LGBT to LGBT+ to keep the unison inclusive of all members. Christina talked about Trans issues that UNISON are committed to campaigning stating.

about, the up coming General Elections, Universal Credit, bedroom Tax, homelessness, zero hours contracts and other issues that affect all members. and she went on to remind everyone to vote in the general election on 12 December, to make sure you are voting please click on the link below, the deadline is 26th November.

Following this Keynote speech the

Standing orders Report three is being given verbally – this included the bucket collection which has been chosen as No Outsiders Campaign more details can be seen here. £406 was raised from

Special mention was given to Octavia St Laurent who famously has been quoted saying “Gays have rights, lesbians have rights, men have rights, women have rights, even animals have rights. How many of us have to die before the community recognizes that we are not expendable.”  Octavia was an LGBT icon, trans woman, and AIDS educator who was active in New York City’s Black and Latinx drag society and Harlem’s drag balls. She came to public attention after being featured in the 1990 documentary Paris Is Burning. Octavia can be seen perfoming in a Harlem Drag Ball Below…

Following the discussion of this motion we now see a short video message from Angela Rayner Labour Shadow Secretary for Education.

The final section of the Annual Report is being discussed and subsequent motions. These were the following.