The conference opened with a personal message from Dave Prentis Unison General Secretary welcoming all to the conference.  Dave pledged…

“Your union stands behind you against discrimination no matter what form it takes. We will continue to fight it alongside all of you until the stain of prejudice is finally eradicated from our society, and the equal rights of legislation are borne out through real equality across our country.”

His full message can be read here https://www.unison.org.uk/news/article/2016/11/unison-pledges-continued-support-to-fight-discrimination-of-lgbt-members/ 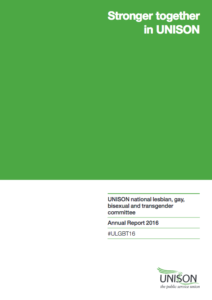 Discussions around UNISONS views on end of life care for LGBT people, Zero tolerance of Biphobia, UNISONS work on intersex equality, transitioning information, including private contractors members into national forum, and scrutiny in the commissioning process.