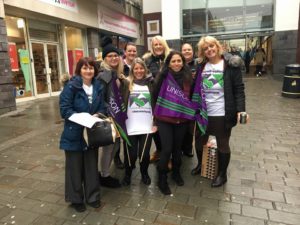 On Tuesday 17 January 2017 our School Support Staff campaigned in Derby City Centre, raising awareness of the Industrial Action they are currently carrying out. They found that there was overwhelming support for their campaign, here are some of the engagements and experiences our School Support Staff had with Derby residents and members of the public.

“I don’t know about anyone else but after today, I feel overwhelmed how many of the public supported us. Parents grandparents everyone I spoke to knew what was happening and were disgusted how the council were treating us. It has definitely given me the inspiration to keep going. Thank you everyone for being there”

“I too was overwhelmed,  it seemed the general public are as fed up with Derby City Council as we are. I also noticed that (as we all do) people were putting heads down to walk past the crazy people with clipboards but as soon as we said “School Support Staff” or “teaching assistants”    We had heads up and where do I sign. Amazing support!”

“We had people coming up to us and saying “where do I sign?”, without even opening our mouths. They saw the flags and t-shirts and headed over, lots of waves from drivers and honking horns in support!  Amazing amount of support!!!”

“We got loads of taxi drivers…they were like sitting ducks. Also approached a bus driver. She said she was so glad we’d approached her. She’d seen us coming and was hoping we’d go over and speak to her. She was so pleased when I turned up at her door”

“I had one lady wasn’t happy she works for NHS for over 30 years said they’ve been  privatised  and the union did nothing for her, she wasn’t going to sign so I told her I have worked in my school for 32 years and union is good, so she signed  well done her and thank you”

“I went to speak to a bus driver. She said she was so glad we’d approached her. She’d seen us coming and was hoping we’d go over and speak to her. She was so pleased when I turned up at her door”

“It was lovely to realise that there is actually support out there and so many people saying they are sick of Derby City Council. I even had people approaching me asking if they could sign, pays to wear the tshirt”

“We gathered signatures by the bus station,  lots of people coming over to support us without even asking them to”

“So many angry people, well and truly hacked off with what this council are not only doing to School Support Staff, but to Derby as a whole.”

“One woman came over to sign our petition and told us that if it wasn’t for the TA at her daughter’s school, she doesn’t know where her daughter would be right now., she was also very tearful as she said it!!!”

A really big thank you to all of those that showed support for our School Support Staffs Campaign we really appreciate it. #togetherwearestronger.