Conference affirms its policy of supporting the Nordic Model Campaign.

Rather than full decriminalisation of the sex trade, the Nordic Model is the human rights 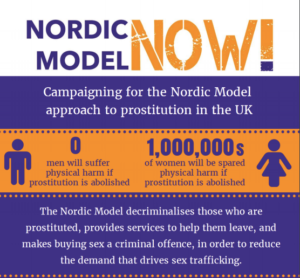 based and equality model. Also known as the Sex Buyer Law, it decriminalises all those who are prostituted, provides services to help them exit, and makes buying prostitution a criminal offence, while imposing tough penalties on pimps and traffickers. The aim is to change behaviour and reduce the demand that drives sex trafficking; thus setting new social norms.

Conference applauds the work of Space International, an organisation made up of woman survivors of prostitution, committed both by raising the public’s consciousness of the harm of prostitution and to lobbying governments to do something about it.

Conference is disappointed at the Amnesty International policy stance, but is heartened that the BMA at their recent conference voted not to legitimiser pimps and punters, rejecting a motion by junior Drs to ‘fully decriminalise’ the sex industry (which means decriminalising pimps, brothel keepers and punters as well as prostituted women)

Conference was very mixed in its opinions and we had numerous speakers for and against. The LGBT SOG group put an excellent counter debate, explaining that the New Zealand model was a far better model to adopt and that the sex workers had stated that the Nordic Model did not make them feel safe. Below are videos that explain both Models.

This video explains the Nordic Model