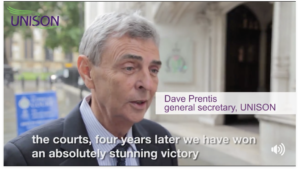 I am delighted to tell you that UNISON Legal Services has been successful in its challenge to Employment Tribunal Fees, Today, the Supreme Court, the UK’S highest court, ruled that the Government acted unlawfully when it introduced fees to bring claims in the Employment Tribunals in England, Scotland and Wales. Since 2013, workers have had to pay as much as £1,200 plus to have claims for sex discrimination or unfair dismissal heard at Tribunal.

I am so very proud that it is our union which has successfully challenged this great injustice. As the Supreme Court has said Employment Tribunals play a vital role in enforcing employment rights by employees and workers including the low paid. The Court found that UNISON’s evidence showed that the fall in claims when fees came in was “so sharp, so substantial and so sustained” that fees could not reasonably be afforded by those on low to middle incomes. It also held that fees particularly deterred claims of low value which as we know are generally brought by the most vulnerable workers.

This historic judgement makes heavy criticism of the Government’s actions. It found that the system of fees introduced in 2013 infringed constitutional rights. The Court said that citizens’ right of access to the courts which is guaranteed by Magna Carta was effectively prevented by the Fees Order which introduced fees in Employment Tribunals. The level at which the fees had been set contravened “elementary economics and plain common sense”.

This decision in our union’s case will benefit all working people.

Our next steps are to call for the Government to

I would like to thank all members of UNISON Legal Services who have worked tirelessly on this case but particular mention should be made of Adam Creme, Shantha David, Ben Patrick, Kate Osborne and Grant Haycock and to Bronwyn McKenna, AGS, who has worked with me on this.

An absolutely stunning victory – for everyone in work.