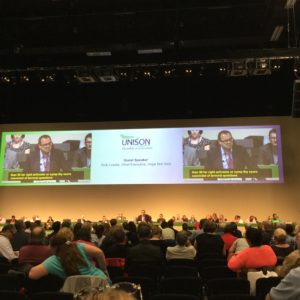 The afternoon session has begun and we are now hearing from Guest Speaker Chief Executive of the Hope not Hate organisation. He is talking about the recent murder of MP Jo Cox and the significant affects this has had in the UK, and also what can be done .

A video has just been shown covering  TTIP: A threat to the food on your plate.

you can watch this now… 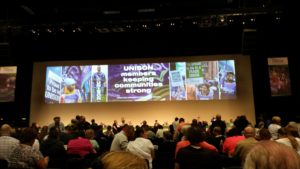 Today started and first order of business was the previous day’s emergency composite motion which ended with a card vote, due a equal split vote for and against the motion.

Now we move on to the Local Government Service Group Executive Annul Report and SOS Campaign and Cuts. Motions surrounding Youth Services and Youth Workers are now being discussed.

Now an International Speaker Jan Willem Goudriaan, General Secretary of the European Federation of Public Sector Unions. Talking about europe and where the uk fits in with this.

Current discussions and motions for the fight for fair sickness absence procedures and ‘disability leave’, also a motion for the Food Standards Agency – pay, terms and conditions.

Stress and overwork is being discussed now with the emphasis on requiring more resources to help deal with this important issue. 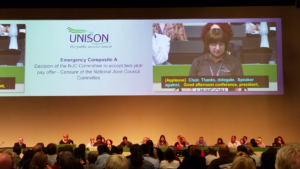 During this part of the composite our Schools Rep Sue Bonser delivered a speech to the delegates and it was clear the support for the current action that has been taking place in Derby.

Now it’s off to get some dinner and to talk about what happened in today’s conference.